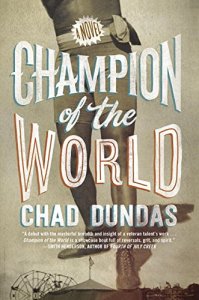 I am thrilled to report here that the first “long-lead” review for Champion of the World came this week in the form of a starred offering from Kirkus Reviews.

As a person who has looked on enviously at more established writers whose books boasted being awarded the Kirkus star, this is something of a smallish dream come true for me. At the very least a meaningful achievement checked off the list.

Kirkus writes of the book:

“Dundas puts together a tightly woven piece of storytelling punctuated by some intriguing close-ups of wrestling when it was taken seriously … the novel has the feel of noir but is rounder and richer than a Jim Thompson outing. Dundas suggests writers known for loosely historical works, such as Doctorow and Chabon, but he features a pared-down, punchy style that goes well with his characters’ basic raw ambitions and emotions.”